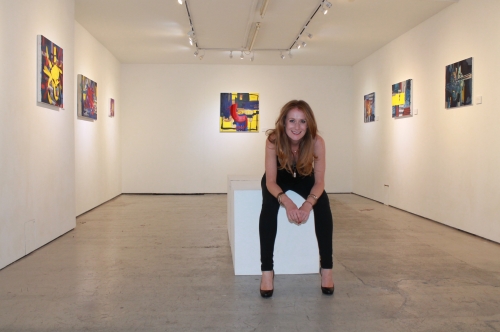 It’s the 3rd of January and I’m sat in my studio thinking over the last decade- that then and now chat most of us have at this time of year.

To jog my memory I flicked through my visual diary from 2010 when I was in the final year of my undergrad. in fine art in Ireland- how my work has changed! During that time I was interested in heavy patterns, making motifs and admiring artists like Beatrice Milhaze but towards the end of my diary I’m citing artists like Christopher Wool, Charlene Von Hayle and Fiona Rae and becoming involved with paints materiality and mark making.

A lot has happened in the last 10 years but my painting practice is still engaged with the same ideas I had in 2010. What a nice reflection, a reminder that I’ve remained true to what I am interested in as an artist . . . . . . I wonder how far I’ll have pushed these ideas in 2030!

Image: At my first solo show at 5th Base Gallery just off Brick Lane, East London, 2017